The concept of sculpture as a stable object, the interest for the material and the manufacturing process situate Frida Baranek’s works within a practice of sculpture which developed in the eighties.

The ruptures operated by Minimal Art, Conceptual Art, the in-situ practices and the attitudes felt as dogmatic by a certain number of artists generate practices based on individual research. Again Picasso’s, Julio Gonzalez’s, David Smith’s, Alexander Calder’s or Anthony Faro’s works are revisited in a history of sculpture intimately linked to material exploration. Thus is set the need to work within the limits of the material to reach the work’s content and visual expression, experienced as non-dissociable.

Frida Baranek chooses most of her materials for their pertinence to the industrial world. Iron sheets, iron and steel shafts, iron or steel wires are submitted to the ordeal of doing. Hence the objects proposed to the eye are neither small nor monumental, but at best over-scaled in relation to the body.

As they are more often exhibited outdoors before their use, they lose their primary appearance. Maybe that is why some sculptures possess the strange beauty of industrial wrecks.

No drawing, no previous study precedes work and each sculpture, without ever being its demonstration, reveals a possible metamorphosis of the material up to its limit point.

The difficult manufacturing process builds the works from the inside, “penetrates” the material to reverse its physical properties: top and bottom — inside and outside. Formal exploration, indistinguishable from the physical and mental investment that goes along with it, preserves the object’s organic intimate character.

The sculptures’ plastic singularity allows the apprehension of the different steps of that research.

In 1985, a red balloon sustaining a stone literally and plasticly reverses the Law of Gravity. With that piece, the rule of the game from which the work is produced is radically set. In the 1988 piece, rusty iron plates wrinkled like simple paper sheets create that antinomy between the material and what it reflects, which gives it both, airiness and heaviness. The piece pierced by iron shafts is a habile play on a balance-imbalance effect.

The work reaches its complexity with a piece made in 1988 with simple iron wire in which metal plates are inserted. No technical process there assembles the different parts that compose the work; they coexist in a reverse balance game where the lightest seems to sustain the heaviest and they uncover that open, airy shape that rises from the ground to the ceiling or from the ceiling to the ground.

Despite its extreme materiality, the work reaches here a dematerialization state that denies with its fluid effect the very characteristics of sculpture — weight and mass.

“Bolo” (1990), made with iron wires and small white marble stones inside, reaches a limit state of matter and sense. Materials pass from one shape to another and we are both inside and outside the object.

The object becomes tactile, it calls for a haptic type of vision in the sense that the eye would be subordinated to the tactile. [1]

In spite of the work’s apparent indifference to space and its stable, fixed character, spectators still have the experience of their own perception.

Without trying to build a formal genealogy that does not exist in Brazilian art, they are, however, brought together by a community of intentions, drawing from perception phenomenology and the way it developed.

The history of modern Brazilian sculpture truly begins with the Neo Concrete movement (whose manifesto appears in 1959), a movement that broadens the Cartesian and geometric principles towards an open thinking on work.[2]

Gestalt theory-based Neo-Concretian fostered perceptive experience with the help of a geometrical vocabulary.

The expressive, fundamentally organic force of Lygia Clark’s “Bichos” (1960) was conjoined to a mathematical spatial dynamism which appeared as a “relational object” asking the spectator for sensorial and corporal participation.

In the sixties and seventies, Conceptual Art and installation practices found in Helio Oiticica and Cildo Meirelles a new and specific form. The refusal to traditional art forms and the acute conscience of politics determined very different works. The importance of irrational and uncontrollable aspects of the universe as argued by Oiticica situates the current which developed in Brazil in opposition to Minimal Art.

When Robert Morris states in 1967 “I wish Gestalt were absolutely visible, absolutely evident at first sight”[3] , one measures the extreme difference in attitudes but one equally measures the extreme lack of historical knowledge of the currents of thought that would allow us to analyze art history and modernity outside obligatory references tied to economically developed countries.

In the last works of 1993, the use of steel falls and American military aviation elements metaphorically stresses that opposition between two “universes”.

The steel wires look like hair that imprison a material which is neither neutral nor devoid of references. The work is not symbolical, however, and its aesthetic ambitions do not rest on any asserted ideology. It still formulates a complex cultural operation.

Frida Baranek’s works subtly, precisely and personally articulate a cultural legacy that is specific to a practice of contemporary sculpture.

[1]” When the work’s space is structured according to the dimensions of close sight, it can become a seizing space. That connection between the seizing space and sight marks a possibility of viewing a particular structure: the type of view is haptic (from the Greek work “apto”: to touch, so as to seize). In Robert Maldiney, Regard, Parole, Espace, Editions l’Age d’Homme, Lausanne, 1973.

[2](…) Still left is the fact that beyond their theories which praised science objectivity and mechanical precision, true artists Mondrian and Pevsner, for example, built their works out of a hand-to-hand fight with the expression which often overstepped the limits imposed by theory. But the work of those artists has until today been interpreted in the light of theoretical principles denied by their work itself.
We propose a new interpretation of neo-plasticism, of constructivism and of the different analogous movements, based on the conquests of expression and giving precedence to work rather than to theory(…).
The work of art is not limited to the occupation of a place in objective space but transcends it to find a new meaning: that objective notions of time, space, form, structure, color, etc… are not sufficient to understand the work of art, to account for its reality.
(…) In the language of art, the so-called geometrical forms lose the objective character of geometry to become a vehicle for imagination.
Rio de Janeiro— March 1959 — Neo-Concretism manifesto. Amilcar de Castro, Ferreira Gullar, Franz Weissmann, Lygia Clark, Lygia Pape, Reynaldo Jardim, Theon Spanudis.

“In 1985, a red balloon sustaining a stone literally and plasticly reverses the Law of Gravity. With that piece, the rule of the game from which the work is produced is radically set.” 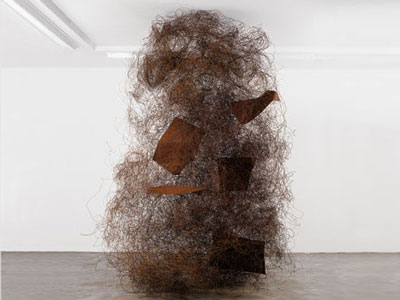 “In the 1988 piece, rusty iron plates wrinkled like simple paper sheets create that antinomy between the material and what it reflects, which gives it both, airiness and heaviness. The piece pierced by iron shafts is a habile play on a balance-imbalance effect.” 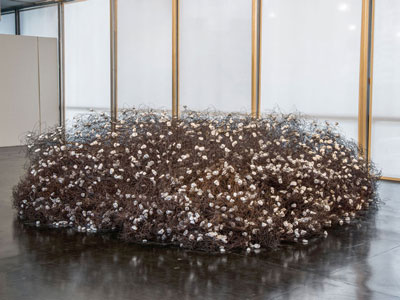 “‘Bolo’ (1990), made with iron wires and small white marble stones inside, reaches a limit state of matter and sense. Materials pass from one shape to another and we are both inside and outside the object.”