Frida Baranek’s works up to this point may be summarized as working within the Wittgensteinian conception of knowledge as thread. Her combinations of different materialities formed an organic whole whose strength lay in the assimilation of differences. The physical presence of her work did not stem from a single and coherent unit of material, but from a double disintegration: first, the whole was disintegrated by the alchimistic mix of several materials, then each of those materials was itself profoundly disintegrated.

Within the great variety of conceptions of knowledge that have been developed through the history of ideas, one fundamental distinction may be articulated by saying that there are external and internal forces responsible for the shaping of knowledge – there are spaces and there are threads of knowledge. In the above passage from Wittgenstein, the conception of knowledge as thread is developed.

Wittgenstein tells us that there are always different fibers that form a thread. In the same way, knowledge is a composition of several sources; it is never composed of a single unit, but combines different threads in itself. It is organised like a modern cable. The multiplicity of different fibers is what makes a thread or a cable durable; the chaos of the multiplicity is responsible for the strength of the whole unit. In this conception of knowledge, it is the material itself that constitutes the knowing. Its combination of several elements, its very physical presence, bring about an organic knowledge that is always constituted of differences. Within this conception of knowledge, the place of Frida Baranek’s work will be clear.

Modern Philosophy has brought a second concept of knowledge. The conception of knowledge as space or tube is more recent than the conception of knowledge as thread. This conception, that of Michel Foucault, tells us that it is not the object itself that has a specific significance and will therefore form a certain knowledge. Knowledge is not an addition of several elements; it is the form in which the object is enclosed, its surroundings, that determines our knowledge of it. Knowledge is the consequence of contexts, not content. It is formed by border lines. Tubes form clear border lines whereas threads do not. Therefore, one can say that it is the space around something that determines what it is and what it is not.

This structuralist revolution was provoked by the simple idea that spaces shape knowledge. When Baranek puts closets in the space of the gallery, the new space she creates within the space undoubtedly creates a new form of visual knowledge. Even though the air that is enclosed by the closet stays the same, the space surrounded by it is not what it was. Suddenly, there are distinctions such as outside and inside, open and closed, whole and empty, visible and invisible, secret and exposed – distinctions, judgements and statements that are at the basis of a new visual knowledge not there before.

It is the achievement of Baranek’s present show to have combined the two models of visual knowledge in one piece. First, Baranek has put lines in the room that serve as borders. From the borderlines of the closets derive new space of visual knowledge within a known room. Instinctively, one can’t resist opening one of these wondrous and fantastic cases to discover the threads and tubes inside it: New spaces and new non-spaces. A significant transformation then occurs: Putting cables and tubes in closets doesn’t mean a simple addition of two elements that stay the same. Baranek’s work would not be a veritable synthesis of two elements if they weren’t, each of them, fundamentally altered in their very nature. There is a profound interpenetration and transformation of both inside and outside; the outside changes the inside just as the inside alters the outside. A closet in which there are no clothes, shirts and skirts doesn’t remain an ordinary closet. lt is profoundly alienated from its original function. The alien, the raw material inside the space transforms the closet into an exhibition site. The closet turns into a little museum within a museum that reminds us of Marcel Duchamps famous boîtes en valises.
But the magic closet is not only transformed and alienated from the inside; the inside, the content of the closet is altered as well by it’s outside. The threads and tubes do not hang between two posts, as in Baranek’s earlier works. Even though they still hang, they don’t form a horizontal curve anymore. Hanging down from a horizontal pole, they fall vertically to the base of the closet.

Even more important, the raw material hanging in the closet ceases to be raw material. It is the most important aspect of her present show that Baranek’s creation alters the very nature of the raw material. Like the pioneers of Arte Povera, she doesn’t only work with the force of the primary powers, but questions and challenges the concepts of nature, primacy and origin. Hanging there instead of suits and skirts, the raw material gets domesticated and, in a way, cultivated. One doesn’t think so much any more of the nature of the material, of the elementary power of copper and rubber. The associations linked to the primary material are replaced by the many associations that come about by putting an alien into a closet: Associations of childhood and fear, of secrets and hidden things.

What is alien is always hidden in western culture. But in Baranek’s work it is hidden in order to be discovered; in this way, the view of the spectator is shifted away from the nature of the material to its sublimation, to the many ways of transforming nature into culture and threads into tubes. 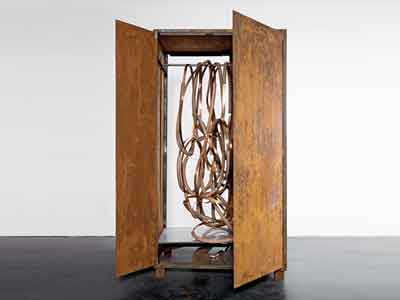 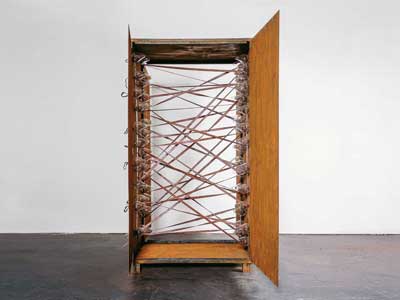