Debris. Heaps of iron and stone. Remains of an awkward construction. So, Frida Baranek’s recent sculpture may seem to the eye which yields to the logical demands of her work. The artist herself proposes the temptation of fallacy when referring to the “reconstruction” situations of her sculpture.
In the last years, after the landing and the clamor of the neo-expressionist painting, the dust of the pictorial pleasures lies down. A musical band passed, leaving its sounds and paintings. Now, we can see better the sculpture scene in Brazil.

There are a ground and an atmosphere where the sculpture is historically concentrated in Camargo and Schendel and centered in the radical experience of the neoconcretes: Weissmann, Amilcar, Clark, Oiticica, and on their own way, in Pape and Willy de Castro. lt is a sculpture which is built as space and phenomenon to exist as the dimension of subjects: it rescued the artist and sheltered the other, the public, while essential condition.

From another time, a generation, no more rootless, appears and affirms themselves, inheriting that tradition of ground and air. The historical reference does not mean here resuming the postmodemism, nor the side of the nationalist legacy. It was (is) a live instance to educate the eye and develop the knowledge. At the same time, it embodies, transforms, and even abandons legacies and Duchamp’s universal marks to the minimalism from the povera art, conceptual art, matterism and opens its own mental space and place within the context of the contemporary sculpture. It founds its own issues. This time is condensed in the works by José Resende, Tunga, Waltercio Caldas, lvens Machado, Fajardo, Clido Meirelles, lole de Freitas.

In the last years, a new generation appears with Marco do Valle, Nelson Felix, Angelo Venosa, Jac Leirner, Ana Tavares, Nuno Ramos, Maurício Bentes, and Frida Baranek, among others. And more recently, Ernesto Neto. Lorena Geise… Bevilacqua, Eduardo Frota form a group between those who broaden the presence of sculpture in the Brazilian scenario.

In her background, along with Tunga an João Carlos Goldberg, Frida Baranek traces her genealogy and defines her option. It is in this vast picture of the recent history of Brazil that Frida Baranek’s work must be measured. Generally speaking, contemporary sculpture “at this moment, vagrant and erratic, out of center and uncertain, seems to experiment for the first time, its absence of space, its virtual opening for all spaces.” (Paulo Venâncio Filho). Frida Baranek’s sculpture is many times the created object (as a device that demands the surrounding space) and this same space is this and that. It is here and there.

The use of glass, as in Escudos (1983), operates the transparency as conjecture of the ambiguity. They are as the Wittgenstein sculptures, live concepts of translucency, space through which passes, in the solidity, the eye. In Escudos, the surface mirrors what is in front, and embodies what is behind, which may be vastness itself. Inter vision. Here, the sculpture is the between space, clashing the front/behind visible: “Transparency and reflex may be only in the dimensions of depth of visual image.” (III.150 Durchsichtigkeit und Spiegeln gibt es nur in der Tiefendimension eines Gesichtsbildes, Ludwig Wittgenstein, in Remarks on Colour).

In Não, the word engraved in glass projects itself as shade on the ground as a strange notion of opaque mirror, denied a changeable with the circumnavigation of the sun. Recently, in stone and iron, her, “witnesses of disaster” (Lorenzo Mammi), arrived from somewhere, may leave its precarious balance, of tense springs and torsions, entangled imprisonments, as if disaster could be remade in disaster (and not in “work”) and spread about the adjacent ground. Here, the object is a centrifugal force aspring for more space. This reorganized memory of chaos are as darted catapults, scattered forces remade in new structures. In her project Ilha (1984), a satined plastic buoy (0.90 meters of diameter and 30.00 meters of length), floating in Rodrigo de Freitas Lake, recomposed the shape of the Dois Irmãos mountain. Here also, Frida Baranek’s sculpture is made up of the surrounding space of the sight focus, as a physical phenomenon and mental operation, Ilha, is this geography, continues without prescinding the concept of surrounding water. Ilha is an object enclosed by water on all sides. This Ilha mirros itself in the reflecting water and its satined surface captures and unfolds the reflected light. After these physical issues, Ilha induces to the comparison of its shape with that of the dois Irmãos, present at the distance and confronted in sight.

The Frida Baranek’s sculpture combines unequal states and situation, put together by the logic of a sight of strangeness. These strange relations can not be traced only in the symmetrical confrontation of opposites or in the ambiguous, but in inversions and unexpected poetical relationships. Paving stones rest in tense gravity over twisted iron bars held to iron plates as an irregular bed of a fakir. Steel plates articulate, supported on springs and stones or pierced through by bent bars, the only points of fragile contact with the ground. A stone tenses up a spiral. There is a fluctuating tension in this game of mutually imprisioned forces as if a slight touch could alter its organization, release the movement and redefine the spell of the work of art as transiency.

Air chambers and glass plates also combine strangeness: the imprisonment of air and obstacles to the eye articulate new relationships. Tires and rubber balls are lungs and “soul” (pneuma) in this new corporification. Inflated with air, water, and sand (three transparencies, because in the sand is the grain and the seed of glass), the chambers deform themselves physically in some places, at the same time in which its buoy function deforms itself, because it now accumulates the functions of floating and submerging in different spots of the body.

In the exhibition at the Petit Gallerie (1985), a sculpture was presented as a “balloon”, in an inverted position. A great red ball (the “balloon”), resting on the floor seemed to be forced to indicate gravity, while at the top the sculpture stone (it was not neither anchor not ballast), but it was in the space of the “lighter than air”. More than a Balloon, this sculpture is an ironical lcarus. A fall upward. Its irony spares the character, but ruthlessly furthers the drop of the eye in the failure of its logic.

Another situation of strangeness is set up with a sculpture (1987) where a bar has a waterpot in one of the extremities and a round hook on the other. Sphere and semi-circle of equivalent diameter. After all, “the difference between circle and the ball is the weight”, as proposed in Cildo Meirelles’ work (1970). (Or, ancestorially, “il punto é la prima ubicazione tridimensionale – la sfera inesistente”, By Vicenzo Agnetti, 1970). Nevertheless, once establishing the probabiltiy of visual confrontation of sphere and circle, Frida Baranek transforms this object into a pattern of the sight. Its fulcrum would be unbalanced in the comparing weight and mass at each extremety, but it would harmonize when perceiving shape and proportion. The eye passes through this unbalance and symmetry. It is in this mental passage that the spell of immobility breaks out. In these, “heapes of debris” consistently organized as sculpture, handling of matter does not take place to produce appearances or balance, it is an absence of matter. It is an absence of formalism and, above all, an absence of geometry. Basically, the artist wants to handle the impalpable, the forces which may articulate themselves in a new situation.

In Frida Baranek’s sculpture, execution has little importance for the dimension of temporality of gesture memory. Rust, although recalling that “there was a time when those surfaces were smooth and clear” ( Lorenzo Mammi) do not have the magnitude of the natural history of metal, which will replace sculpture in the primitive situation of dust as Amilcar de Castro’s rust. Less still, its time follows the strict order of chronology or syncronism, as a “probabilitiy of a past and a promise of future development” (Lorenzo Mammi).

In this work there is plural time. Free from ephemerises mechanical course (making, dust, history, chronology), time emerges here and there as requests on its moment. It is much closer to the abstract time of music. The iron plates, although similar, are never treatet as modules, from which would follow a rhythm and the consequential mechanical time. In their crumpled shapes, each plate meets its individuality as fragment.

The asssumption of the renewal of disaster is more than a repetition of history, or a process of circular time, or still a recalling of mythical time of the eternal return. It is the anxious time of the imminent. That of the tension summarized in imminence. Here, we can recall the title of some Jean Dubuffet’s sculptures (1954): “Small statues of precarious life.” The existence unfolds itself as probability of dissolution. The instability of this balance of things involve the possibility of movement. These ordered fragments are as Novalis’ Fragment: “Everything is naturally and tender. Mortality and instability are privileges of higher natures” or still, “The spirit is essentially rest. The grief derives from the spirit.” There is a fluctuation, either in that physical tension among the parts, or in the mental course of the eye in some works. Frida Baranek’s present sculpture lives as situation, its structure is a to be. A state of things. The work is more a lasting momentariness than its own affirmation as concluded act. It is not the “end”. It is more the now. 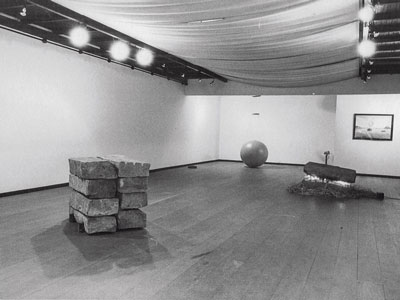