The relationship to space is the essence of three-dimensional thinking in Frida Baranek’s creative expression. Simultaneously, the material, the matter, imposes itself through its aggressiveness visible at first impact. Catastrophist by the use of an industrialized society’s connotative elements, the character of deconstructivist “assemblage” presides over her vital instal­lations, significant in their spatiality: stone (granite or marble), iron plates, flexibles and oxidized wires compound her vocabulary in a vehement speech, apparently purely intuitive. The artist respects the material, which is perceptible in the implicit acceptance of its prior condition. As a conse­quence, time becomes present, in its untouched mark on the few selected materials, parallel to her concern with space. This young artist, in the dawn of the nineties, joins other Brazilians artists of the some lineage, as can be stated by Nuno Ramos’ and Karen Lambrecht’s present proposals,

At second sight, however, drawing linearity seems to insinuate itself through the three-dimensional transparency of the work, rendering explicit the manipulation she operates on her materials, adapting them to her project. Frida Baranek “conceives the image” in a mental way as a first step, as she says, before she makes her installation. Her drawings’ gestures, however, are visible in her work as a result of past experiences, a discipline of exercises – albeit kept as mere annotations today – that reveal shapes and planes as a penetrable environments, which the eye can transverse through the array of oxidized wiring. Poetry thus becomes evident, with intensity and lightness, in these surprising installations. Here, balance – implicitly the structure -, spatiality and linearity seem to combine in an apparently unusual confrontation of instigating sensorial qualities. 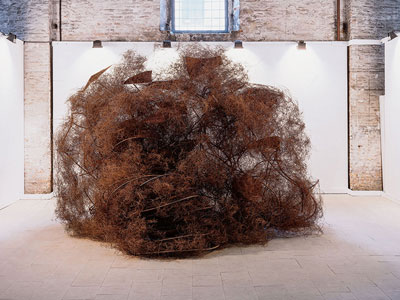