Frida Baranek’s trajectory is punctuated by her constant displacements — a voluntary poetic diaspora that led her to leave Brazil to study in the United States, to return here, to move to Europe (Paris and then Berlin) and, finally, to settle in New York. Intentionally displaced — or belonging in part to all these places at once — she sought in sculpture a counterpoint to movement. Since the 1980s, weight and a raw materiality have been the recurrent elements of her work, a temporary way of taking root, given the contingency of movement.

The use of materials is a determinant element of her poetic. They present themselves without rejecting an originally chaotic drive, tensioned by an act of ordering. It is from within this tension between structure and informality that symbolic anxieties silently come unmoored. Elements of the body — mouths, vulvas — appear in certain pieces with no loss to sculptural concreteness. The ability to perceive some reference does not remove us from the work’s physical presence; it merely adds another possibility, an imagistic insinuation harnessed to the material of sculpture. In this regard, I see a dialogue with the postminimalist work of Eva Hesse, whereas the tense oddity of the materials — which I call symbolic derivation — resembles the work of Tunga: The raw subtlety of materials that typifies the former and the symbolic strangeness that is characteristic of the latter.

The tensions between interior and exterior, between emptiness and fullness, between light and heavy volumes, between soft and hard forms contribute to our disorientation even as they seduce us. These ambivalences of form translate an unstable sculptural presence, a way of being in constant mutation, at once symbol, weight, or cry. From the incisiveness of the material to expressive insinuation, a formal restlessness exposes her existential transitivity. Like her life, her sculpture is about displacement and adaptation.

It is from within this process of constant reinvention of the self that I perceive the new pieces she calls exteriors. The sense of strangeness has left the material, symbolic insinuations are gone, leaving a near-minimalist containment.

They are two simple wooden decks installed upon iron tubes. One is rectangular, measuring 2 by 4 meters, and the other square, each side measuring 2,83 meters. In the first one, the tube passes through the middle of the piece, dividing it; in the other, it cuts it diagonally. The sense of disequilibrium is heightened in the latter instance. People are expected to climb up onto the sculptures and seek the point of equilibrium. This attempt at balance alludes to the process of displacement and adaptation in which her life and work come together. As the artist has observed, “In creating these two moving pieces I touched on surprise and time, elements that are always present through the simple fact that one thing has just happened while another is about to take place”.

One thing that readily draws attention is that these sculptures destabilize the floor. To climb onto them is to experience imbalance, to know that one movement has just happened and another is about to take place. In this regard, they are antigravitational sculptures, they do not hold us to the ground, they are not metaphors for weight, stability and place. On the contrary, they express a search for the place, for the point of equilibrium that is always about to be lost. These sculptures trade weight and verticality for instability and horizontality. The body ceases to be symbolically suggested in order to be poetically seized. It takes the stage in order to lose balance. Unfamiliarity ceases to be symbolic and becomes physical.

The tradition of participation in Brazilian art, from Lygia Clark’s bichos to Ernesto Neto’s naves, expresses the search for harmony between body and world that typifies interaction. Participation considered as shelter. In this case, perhaps, there is more of a link to the North American tradition of Kaprow and Morris; there is a relationship of provocation, even if the playful swinging — reminiscent of a seesaw — is also noteworthy. Even at play, however, the body must remain alert to the risk of losing balance. As the artist explains, “The transference of tension from the object to the body occurs through use. When the body balances itself, it surrenders to enjoyment. I like this game between tension and pleasure. It is interesting to provoke such feelings through an object”.

After the body comes into direct contact with the wooden platforms — as may be observed in the sculptures titled exterior 1 and 2 — it returns to the virtual in the spring sculptures. In this case, the game of tension and equilibrium is totally concentrated on the characteristics of the material and its formal execution. It is as if the transitions between stability and instability experienced by the body (or the eye) that climbs onto the sculptures were frozen at the very moment in which form becomes fixed in these other pieces. Organic design is recovered, forcing the tension toward the dynamics of gesture and form, of improvisation and precision.

These features — organicity, improvisation and precision — also appear together in the prints. Work, craftsmanship, and material intervention stand out here in the way they achieve a rhythm of textures, lines, shadows and color upon the imprinted surface. The process demands mastery of craft, a knowledge of the material’s “desires”, while incorporating chance, unforeseen events that erupt during the process of their crafting. In explaining certain stages to me, Frida is clear about her interest in provoking an imperfection that will accentuate the graphic effect: “I pulverize a [type of] iron dust that sticks to the glue. That is how I obtain texture. I let it dry for three hours and move the plate in order to eliminate the excess iron dust. In doing this, the line becomes more unsteady, bearing the mark of that movement, adding ideas of time and imperfection to which I am attracted”.

Restiveness — the constant transformation of formal strategies and results obtained — reveals an artist in displacement, with no fixed poetic residence, absorbing elements of each artistic context experienced. As globalized as our world may be, we are permeated by singularities that distinguish and integrate us. To break with such references is to plunge into instability, the confrontation of which, whether poetic or existential, leads to a stripping away and the rejection of conventions. These works by Frida Baranek represent another stage of this exercise in detachment.

All the artist’s statements contained in this text have been drawn from our e-mail correspondence during the months of April and June, 2079.
© Luiz Camillo Osorio
In: Frida Baranek, Exteriores. Sao Paulo: Gabinete de Arte Raquel Arnaud, 2009. (exhibition folder) 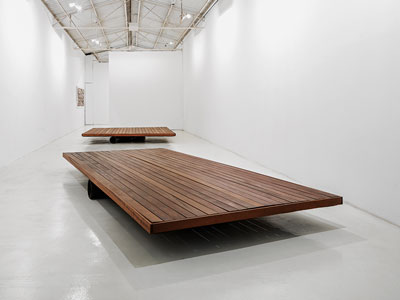